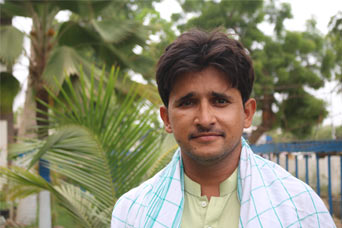 Hailing from Khairpur, 25 years old Kashif and his family moved to Karachi five years ago in hopes of a better life. Kashif is third amongst his 5 siblings, yet the most responsible one. From a young age he would come back home from school and help his mother with household chores. He would also be the only one accompanying them to their doctor visits. His dad being a diabetic was often sick and had to miss work. Then too, Kashif stepped up by taking financial responsibility on his shoulders. He started doing odd jobs and eventually had to leave his education when his two older brothers got married and moved out. They stopped contributing to the household expenses and it fell on Kashif’s shoulders to support his aging parents and two unmarried sisters.

Besides other odd jobs he also found work in a bakery and likes it so much that he dreams of the day when he can save enough to start his own bakery. He works day and night to not only support his family but to also have some savings to make his dream come true.

However, his dreams were shattered when he realized his vision was deteriorating, he was unable to see clearly and his work started to suffer. At first he shrugged it off and decided to get his eyesight checked but when he was unable to see within a matter of weeks, his family forced him to go to an eye clinic. Amidst this he also lost his job at the bakery which only made matters worse. Being the sole bread earner, his family had no means of income left. His sisters tried their best by stitching clothes but income was sporadic and not enough to pay rent. They were in danger of losing the roof over their heads.

At the eye clinic the doctor feared Kashif had something more than just a simple eye ailment, he advised him to go to a hospital for his checkup as they were not equipped to handle complicated cases. Kashif’s anxiety increased as a reputable hospital meant exorbitant amounts of money; something he did not have and might have to end up using his meager savings.

A relative seeing his misery informed him about LRBT and how it provides quality eye care absolutely free of cost to those who cannot afford it. Still unsure whether his treatment would actually be free he eventually agreed. At LRBT, Kashif was pleasantly surprised over the smooth process of his checkup and diagnosis and at the helpful and gentle behavior of the staff. He was diagnosed with Keratonus in both of his eyes, a condition which weakens the corneal tissue causing permanent corneal deformity. The disease had progressed quite far in his right eye and he needed a corneal transplant which was carried out next week. At his post op checkup his vision was considerably better and once his right eye is healed he will be coming back for his left eye graft also. On leaving the hospital, Kashif thanked the doctors with tears in his eyes and said, “It is so heartening to see that a poor man like me can come to LRBT and be given quality treatment absolutely free. I had lost all hope of ever getting my sight back and feared what would become of my family. Not only did LRBT give me my sight back but saved me and my family from a life of hopelessness and destitution.” 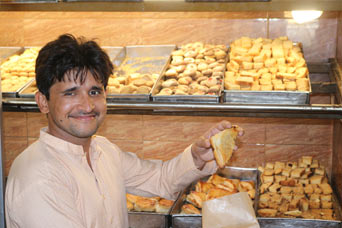 Kashif has resumed work at the bakery and is once again working hard to turn his dreams into a reality.