Umair is a technical engineer, a self-made man he has worked hard his entire life to support his aging parents and unmarried sisters. Being the only son he works day and night to support them and his wife and children. His son Hassan was a cheerful and healthy baby but as he got older the parents realized that something was wrong with his eyes as he would often rub them and bump into things. Trips to the local doctors proved fruitless till one eye specialist diagnosed Hassan with an eye tumor.

Limited means and lack of access to proper health care further delayed Hassan getting timely treatment. His parents did not lose hope though and left no stone unturned in their quest to find a way to save his eye. Umair had to eventually borrow money from relatives and friends as they had used up all their savings and were unable to even afford a checkup at a private hospital. The diagnosis was always the same that his eye would have to be removed. On the verge of giving up they had already scheduled Hassan’s surgery for its removal when someone told them about LRBT.

Umair brought Hassan to LRBT where he was diagnosed with Retinoblastoma (the most common eye tumor arising from the back of the eye, found in neonates and children). The doctors at LRBT comforted him and said it will take time but not to lose hope. At that point in time they just prayed that their young son’s eye would not have to be removed. 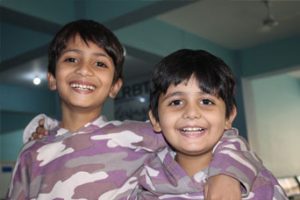 Hassan had advanced eye cancer in his right eye. The doctors first made sure that the tumor had not spread outside the eye. After detailed discussions and evaluation by pediatric oncologists and radiologists, the eye cancer experts at LRBT took up the task to give a trial to save the eye. The treatment started with systemic chemotherapy to prevent the tumor for spreading further. Next, the doctors started laser and cryo surgery in the eye every 3 weeks for 8 months in hopes to kill the active tumor cells that had invaded more than half the eye. This treatment was then augmented with 7 injections of targeted chemotherapy inside the eye. Finally, there was success in not only killing all the tumor cells but also regaining vision and bringing it back in focus!
Umair said, “The doctor’s dedication was commendable, throughout the process the doctors kept us completely informed by sharing images from the eye. We were fully aware of the progress and were involved in decision making which gave us the strength and courage to keep our spirits high during this trying time. The medicines did not initially work, but we actually witnessed the gradual and magical response of the treatment by seeing the retinal images from the retcam. We remember it was after 6 months when we were given the news that the tumor is now inactive but were warned regarding relapse. Now we are asked to come every 3 months for a follow up. The real miracle was when the doctors told us that not only his eye but his vision had also been saved and our young boy would see again and lead a normal life. I couldn’t control my tears; I pray that no parent has to ever go through what we did in the past two years. We cannot ever repay LRBT for what they did for our child except pray for this wonderful institution that truly transforms lives through its dedication and hard work; all absolutely free for those who cannot afford treatment.”