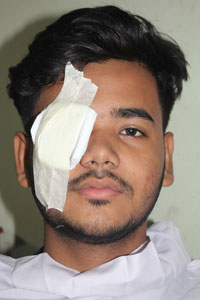 Umar is the 16-year-old son of Muhammad Akmal Khan who works a clerical job in a private office in Karachi earning a meager amount of Rs. 15,000. Umar’s mother passed away last year leaving behind 6 children: 2 sons and 4 daughters. He is the second eldest in the line of his siblings and immediately after his mother passed away he felt a weight of responsibility on his shoulders. He helps his elder sister look after his young siblings and his whole personality underwent a metamorphosis after his mother’s death, from bring a care free child he became a responsibility bearing mature adult.

He is not only a victim of poverty and illiteracy but has to handle responsibilities much beyond his years. While boys his age are either going to school or college he wakes up early in the morning to take care of her family and house before going to school which used to be his only solace until recently when his admission was cancelled as his father could not afford the fee. ‘I only make Rs. 15,000 a month, with the rising prices of rent, fuel and groceries, education for my children seems like a far-fetched dream for now, ‘said Muhammad Akmal, Umar’s father with sadness looming in his eyes.

Life was already not a bed of roses for Umar and what added to his already challenging life condition was a constant pain in his left eye, he complained of not being able to see regularly. His father took him to a nearby hakeem who used traditional remedies to relieve his pain but to no avail. There were days when he would howl in pain and his eyes would tear up and become red.

The final nail in the coffin was when his eye sight began to deteriorate rapidly, he was unable to see. Umar felt devastated and the feeling of helplessness was eating him from the inside. ‘I was so scared that I would lose my eyes, I did not have the heart to ask my father to take me to the hospital because I knew that money was tight’ he said reminiscing about his fear. 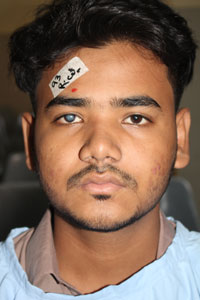 Despite his efforts to put up a brave front, his pain was too much to bear and he could not help but ask his father to take him to the hospital. His father really had no one to turn too, due to his wife’s prolonged illness he was already knee deep in loans, Akmal felt like that had hit rock bottom.   He had nowhere to go and no one to turn to. All his requests for a loan were declined. As a last resort he went to the same relative who had lent him money to help with his wife’s illness. He respected Akmal for his hard work and simplicity but could not offer further financial help. When he inquired about why he needed the loan Akmal shared Umar’s ailment. The relative told him to go to LRBT’s Korangi hospital and also shared the best news that he had heard in years – LRBT provides free eye care for the poor. Akmal breathed a huge sigh of relief and felt as if a great weight has been lifted off his shoulders.

Early next morning he left his other children with his elder daughter and took Umar to LRBT Korangi. Throughout his journey he kept praying that this was not a mirage, that LRBT would not turn out to be an NGO which while advertising free treatment actually charged money from poor. A very skeptical Akmal walked in with his young son, and thus began the journey towards healing for their whole family. Umar was given a complete eye examination and the doctors diagnosed traumatic cataract in his left eye and gave him an immediate date of surgery. When Akmal was assured that everything will be done for free he started crying out of happiness and hugged Umar reciting verses of thankfulness to God and LRBT.

Umar’s surgery was successful; his eye sight is now normal. For their family, it truly felt like a celebration,’ I think my mother is blessing us from the heavens above’, said Umar. They were touched by the care and affection shown by the hospital staff. They kept thanking each staff member that passed by with folded hands.

I didn’t know I was so strong until I was tested again and again. My aim in life now is to get an education myself and my siblings. I will help my father in every way I can to ensure that we get educated. If there were more institutes like LRBT underprivileged people like me won’t have to suffer and go through the hardships like we did looking for free medical help. Thank you LRBT for giving me a second shot at life and to become something, I will never take my eyesight for granted again! – Umar